Deployment and Stabilisation of a Space Web in Micro-Gravity 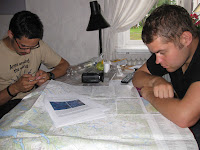 The Saturday started more or less relaxing, all the team members could sleep in. Thomas took the first plane to Kiruna from Stockholm and arrived in Kiruna at 2pm. After picking up Thomas from the airport, Michael, Jeremy and Thomas went to the shopping center to buy food and further camping equipment for the upcoming drive to the base camp in the REXU12 impact area on Sunday. We'll do some more food shoping when Fredrik arrives tomorrow.
Posted by Thomas at 8:35 pm 1 comment: 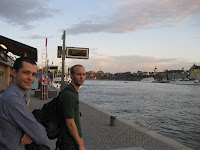 The first day on the recovery mission was the arrival day of Thomas, Michael and Jeremy to Kiruna. Jeremy and Michael flew from Frankfurt over Copenhagen, Stockholm to Kiruna while Thomas started in Glasgow with a direct flight to Copenhagen to meet up with Michael and Jeremy and then continue on the journey together. Unfortunately, Thomas’ plane from Glasgow had a technical problem during the flight and therefore had to fly back to Glasgow which caused a two hour time delay. When the plane was fixed and Thomas arrived in Copenhagen he already missed the connection flight to Stockholm and therefore also the last flight of the day to Kiruna. He had to stay a night at the airport hotel at the airport in Stockholm. This gave Thomas the chance to meet up with the leads of Suaineadh’s electronic team, Adam Wujek and Jerker Skogby, in the city center of Stockholm. It was great to hear their perspective in regards to the safe data recovery and data analysis after the recovery mission. In the mean time Michael and Jeremy arrived in Kiruna on time at 15:30, picked up the car and familiarized themselves with Kiruna. Fredrik will fly to Kiruna on Sunday morning.
Posted by Thomas at 7:38 pm 2 comments:

The Suaineadh experiment went missing after the REXUS12 rocket launch on the 19th of March 2012 from Esrange in Kiruna, Sweden. Due to the fact that the wireless connection between the experiment and the REXUS rocket worked for a few seconds, 22 images of the free flying experiment were collected. These images showed that the Suaineadh experiment was fully functional and working normally. Unfortunately, the last picture received is exactly at the beginning of the web deployment. Due to a malfunction of the radio beacon, the experiment with the recorded data could not be found from the recovery helicopter in March.  The few received pictures of the fully functional experiment motivated the Suaineadh team to come back to Kiruna in summer to recover the experiment and bring it to a successful end. This time is now! Four adventurers will head to Kiruna tomorrow to search for Suaineadh for more than a week. The recovery crew consist of Thomas Sinn from Glasgow (UK), Fredrik Rogberg from Stockholm (Sweden), Michael Sinn and Jeremy Molina both from Stuttgart (Germany). The recovery mission will be carried out from the 17th till 26th of August. The first two days will be spent in Kiruna for the team to get prepared and to organise themselves. On Sunday, the team will travel to the landing zone of the REXUS12 payload to establish their Base Camp. The payload landing place lies 60km downrange from the Swedish space port ESRANGE. Nevertheless, the recovery team needs to travel 140km on paved road, 46km on gravel road and a 4-6km hike through the Swedish wilderness in order to get to the payload landing area. It is planned to establish a Base Camp at the payload landing zone and start daily expeditions into zones of interest over the following five days. The impact location of the nosecone (~1.5km to the south) and the rocket motor (~500m to the north) are known as well and it is assumed that the Suaineadh experiment is lying in between them. The satellite image of the search area indicates a slightly hilly profile without forest, mostly grass land and bushes. It is assumed that the experiment impacted the snow cover in March and would therefore lie on top of the ground now. The team is also bringing a metal detector in case the Suaineadh experiment lies under a cover of leaves or grass. Luckily, there are not a lot of lakes around the area, just one river to the south of the Base Camp. To reach into the zone IV and V on the 4th and 5th mission day, the river needs to be crossed by the recovery team. GPS and maps are used to navigate in the zones to cover as much area as possible. The entire recovery mission will be well documented by video and pictures which will be released as a documentary after the mission. The recovery team will return to Kiruna on Saturday, the 25th of August, hopefully with the experiment in their luggage. The outcome of the mission will be also presented at this year’s IAC in Naples (Italy) in October. Thank you very much to our supporters: the ESA Education Office for sponsoring our flights and the car in Kiruna and the experts of SSC and DLR for their help in preparing for the recovery mission. 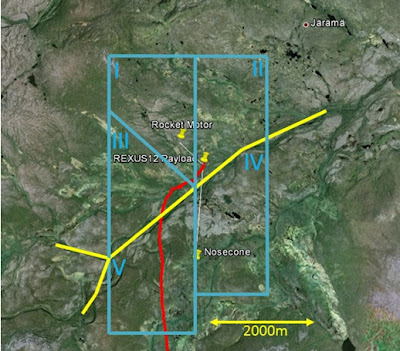 Suaineadh in BBC2 feature on Space Based Solar Power

Yesterday evening, the BBC did a feature on Space Based Solar Power (SBSP) at the University of Strathclyde. Suaineadh, with its web could serve as a structural platform for the solarcells and microwave/lasers for the huge solar power satellites.

The article can be found here:
http://www.bbc.co.uk/news/uk-scotland-glasgow-west-18080883

This video shows the ejected section of Suaineadh, called Central Hub And Daughters (CHAD) after separation from the REXUS 12 rocket in roughly 80 km altitude. 18 images were sent via a wireless from CHAD back to the rocket after separation. Based on the pictures it can be confirmed that the experiment worked: CHAD got separated from the rocket, the reaction wheel started to spin up the experiment, the daughters attached to the web got releases and all electronics (CPUs, cameras, wireless, ...) on board the experiment worked. Unfortunately, wireless communication between the rocket and CHAD was lost after receiving the 18 pictures due to probably tumbling of the rocket. Therefore no pictures of the actual web deployment could be received. CHAD could't be recovered from the recovery helicopter after impact due to a radio beacon malfunction.
Posted by Thomas at 10:38 am No comments: 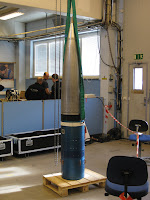 We just had the Flight Readiness Review (FRR) of the rockets REXUS 11 and REXUS 12 and the experiments are ready for launch. This is the first time in REXUS history that both rockets are ready ahead of time and therefore it was decided to launch REXUS 12 already tomorrow (Monday) and REXUS 11 on Wednesday. Strathclyde's experiment Suaineadh will be launched onboard REXUS 12.HOT COUNTDOWN STARTS AT 1300 (Swedish time/ 1200 UK time)! The weather predictions looks favourable with high clouds and winds within the limits.The link for the livestream is available here:http://www.livestream.com/rexusbexusUpdates on our facebook page can be followed here:https://www.facebook.com/pages/Suaineadh-REXUS12/100114003401934
Special thanks to the Suaineadh launch campaign crew consisting
of Adam, Jerker, Malcolm, Fredrik and Junyi, you did an awesome job over the last seven days. Thank you also to all the team members that couldn't make it to Esrange for the launch, it wouldn't been possible without you.
GODSPEED SUAINEADH, LETS GO FLY :)About Suaineadh: 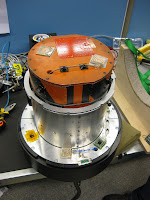 Students from three institutions (University of Strathclyde (Glasgow, UK), University of Glasgow (Glasgow, UK) and KTH (Stockholm, Sweden)) are launching their experiment Suaineadh (pronaunced She-NAID) onboard a sounding rocket in March 2012. The aim of the
experiment is to deploy and stabilise a space web in micro-gravity by means of the centrifugal forces acting on the spinning assembly which is ejected from the nosecone of DLR/SNSB/ESA's REXUS (Rocket EXperiments for University Students) rocket. Controlled web deployment and stabilisation will be achieved by an active control method. This new approach has the potential of drastically simplifying the design of a Furoshiki net while enhancing its stability. The experiment will provide an enormous scientific return on the behaviour of a centrifugally deployed and stabilised large structure in space.

Posted by Thomas at 8:11 pm No comments:

This weekend the Suaineadh team will travel to Esrange in Kiruna (Sweden) for the REXUS 11/12 launch. Suaineadh's launch is preliminary scheduled for the 22nd of March onboard REXUS 12, REXUS 11 will be launched on Wednesday the 21st of March. During the first couple of days of the launch campaign the teams will assemble their experiments and get them ready for the integration in the rocket. In the following, the experiments will be tested for interferences with other experiments or the rocket. The preparation finishes with a hot countdown.
Adam and Jerker will be the first of the team that will drive up to Kiruna tomorrow from Stockholm, Malcolm and Thomas will fly in from Glasgow on Monday and Fredrik and Junyi will arrive in Esrange by Tuesday.
During the launch campaign we will have a live stream on how we get Suaienadh ready for the launch and live footage of the RX11/RX12 launch :)
Posted by Thomas at 10:37 am No comments: